Peptic ulcer disease : Overview and How is it Treated?

What is peptic ulcer disease?

Ulcer formation in the upper GI tract affecting the lining of either the stomach or duodenum, in some rare cases peptic ulcers are also located at the lower end of esophagus. The reason behind the formation of these ulcers relies in the fact that the acid contained in the stomach combined with the pepsin can affect the lining of your stomach. This can happen when the defense mechanism of your stomach against these digestive juices breakdown. So, basically an increase in your stomach acid and decrease in your stomachs defense mechanism make up the perfect environment for stomach ulcer formation. 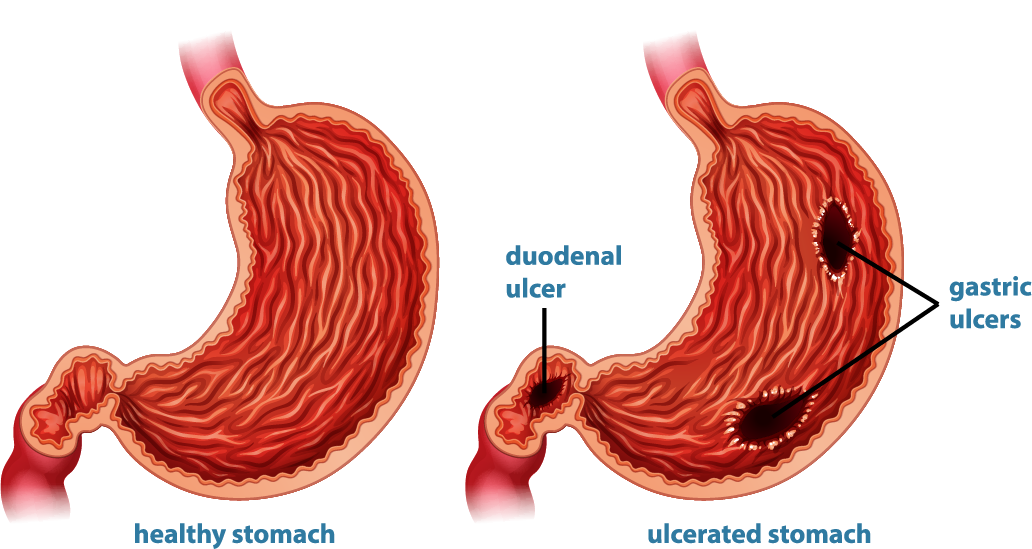 What are the different layers of stomach?

How are peptic ulcers caused?

The balance between the defense mechanism and causing factors should be maintained to avoid ulcer development. However, here are some external elements which can disturb this balance:

How does bacterial infection really cause the peptic ulcer disease?

The structure of H Pylori helps them to invade the cells of. So, when the bacteria damage the cells of mucosa, histamine is released in the stomach. The role of histamine is to stimulate the parietal cells in order to release the HCL. This causes a cascade of problems leading to stomach ulcer. This type of bacteria is mostly transmitted through contaminated water or food.

Signs and symptoms of stomach ulcer

The main complains a patient with ulcer will have are as follows:

Apart from this peptic ulcer symptoms may vary for stomach and duodenum ulcers:

How are peptic ulcers diagnosed?

Some methods for the diagnosis of this disease are as follows:

What complications a patient of ulcers can face

What are the stomach ulcer treatment options?

The primary step in the treatment of every patient is

It is a modern day triumph to be able to treat a disease like stomach ulcer with medication that previously needed surgery. However, there still are some persistent misconceptions about peptic ulcer disease. A very strong myth is that ulcers are caused by stress, food or too much stomach acid when it is clear now that some external factor disturbs the balance between the defense system and acidic environment of the stomach. Just like Dr. Barry Marshal, who decided to clear all this fuss about peptic ulcers by working dedicatedly towards the people, you need a Dr. Vatsal Mehta upon whom you can trust for dedication and passion for finding the best treatment option for patients.
This kind of professionalism and dedication is guaranteed in order to relieve you from devastating symptoms of ulcer. So to get the best stomach ulcer treatment from the most expert professional, at Alfa Gastro & Liver Care.